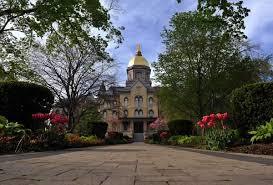 I came to Notre Dame for the first time as a Freshman in the Fall of 1966. Back then, the University was not yet co-educational and there were still Saturday classes.

Because of the prospects of a National Championship year for the Irish on the gridiron, I was quickly indoctrinated into the excitement and mystique of Notre Dame Football. Overall, I found the academic environment to be both challenging and rewarding. In retrospect, my "Freshman Year of Studies" was a milestone of sorts. Not only did it begin my stay in the place that was to become my long-term academic home, but it also transformed me into a "Domer."

I found the Psychology Department, almost by accident, in my second year. It was barely two years old at that point. It was an exciting time because the Department was new and growing rapidly. Since there was not yet a graduate program, undergraduates were the only students available to faculty. Consequently, an undergraduate could get extremely involved in the discipline, not just in courses, but also by working very closely with one or more professors. It was not unusual to find students conducting research projects complex enough to be the equivalent of a Master's thesis. Many of these projects were presented by students at regional and national conferences and a fair number even were published. A very special camaraderie developed between faculty and students in those early years of the Department.

This environment had a very profound impact on me. I became very much caught up in the excitement and stimulation associated with academic research and inquiry. It didn't take long for me to decide I wanted to pursue my studies in Psychology beyond the BA. A big factor in this decision was my association with Professor D. Chris Anderson who had joined the faculty at the beginning of my second year.

Professor Anderson came to Notre Dame by way of the Menninger Foundation and Brigham Young University. He was a specialist in learning and motivation, using animals to study the basic processes underlying these important psychological concepts. By the time I came to know him, he had already established an active animal learning lab in the department staffed mainly by undergraduate research assistants. In the summer after my second year, I got the chance to work in his lab. This turned out to be a fateful opportunity, for it greatly influenced both my outlook on the field of psychology as well as my choice of graduate schools. In addition, it brought me into contact with instrumentation, electronics and computers, tools used routinely in the laboratory by research psychologists to collect and analyze their data.

As my first mentor, Professor Anderson persuaded me that behavior, both animal and human, was a subject matter amenable to scientific analysis and understanding. He instilled in me a deep-seated belief in the inherent orderliness of behavior, a view foundational to the work of a great many psychologists who have long labored to discover the laws of human and animal nature. Knowledge of these laws, I came to believe, was essential to any effort to improve the human condition. How else could we expect to eradicate ills such as prejudice, violence and aggression, so prevalent in our society? Surely, if laws of behavior existed, they operated without opinion or permission. It seemed far better to know and exploit those laws, for noble and humane purposes, than to let them act in blind, random fashion.

Along with encouraging me to have this optimistic, if not idealistic, view of the discipline, Professor Anderson also had a profound effect on my career through his influence on my choice of graduate schools. As a doctoral student at the University of Portland, he had worked with Professor Judson S. Brown, a noted specialist in the field of learning and motivation. At the time, Professor Brown was on the faculty at the University of Oregon Medical School in Portland after spending many years at the University of Iowa. Their association has proved to be long, fruitful and relevant to me because, when it was time for application to graduate school, Professor Anderson encouraged me to consider Iowa. The Department of Psychology at Iowa had a long and storied tradition in the discipline and Professor Brown had just returned there as department chair. As my educational history shows, I considered, applied, was accepted, attended, and graduated from Iowa with a Ph.D. supervised by Professor Brown.

One of the things I learned about the field of Experimental Psychology in my early years at Notre Dame was that it could accommodate a variety of interests and talents. Like many undergraduates, I was initially very undecided about what course of study to pursue for a major. I found myself with interests in very diverse subjects such as Composition, Mathematics and Philosophy. As time went on, I discovered other interests in areas like Electronics and Computers. Each of these pulled me in a somewhat different direction from the standpoint of deciding on a major. After discovering Psychology, I came to realize that this field would allow me to combine many interests in a single profession. As an experimentalist, I could develop and utilize skills in writing, mathematics, logic, electronics, computers and other areas. Psychology is truly a "melting pot" of sorts for diverse interests and abilities.

Another formative figure in my undergraduate experience was Prof. John Borkowski, who had joined the Department around the same time as Prof. Anderson.  Prof. Borkowski and I shared a lot of common ground, and he would come to have a very profound impact on the Department as its second chair.  Upon the occasion of his retirement, I had an opportunity to reflect on both his many contributions as well as my connections with him.  Those reflections are here.