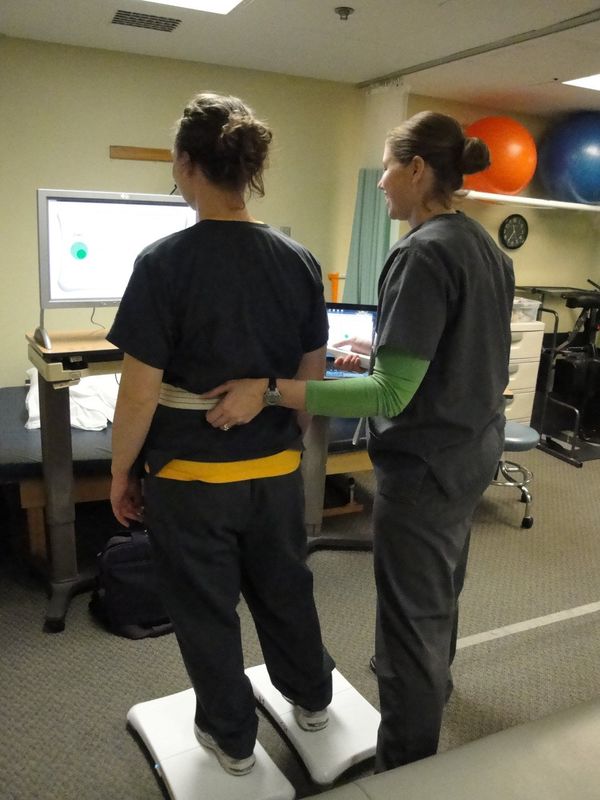 The origin of this project was the realization that low-cost gaming peripherals, like the Wii-fit board or the Microsoft Kinect, might serve as useful ways to measure human performance while also providing another form of human-technology interaction.  One practical application of this possibility that immediately became apparent was the need physical therapists (PTs) have to objectively measure balance of patients who are undergoing rehabilitation for strokes and other forms of neurotrauma. Commercially available balance measurement tools are very expensive, which makes them prohibitive for most PT clinics.  As a result, PTs rely on observation alone to gauge patient balance and/or weight distribution or use crude tools like bathroom scales, neither of which are optimal approaches.  Motivated by this opportunity to create an effective but inexpensive way to measure balance, we assembled an interdisciplinary research team including colleagues from the College of Engineering with whom I had worked previously.  Together, we reached out to the stroke rehab unit at Memorial Hospital who were very interested in working with us. Combining input from the PTs with our own thoughts, we developed a software system, called WeHab, to measure the weight distribution of a patient standing on the Wii-fit board, and then feedback the results of those measures to the patient and therapist.  Also, WeHab could lead the patient through a series of standard rehab exercises, like weight shifting and sit to stand tasks.  The outcomes of this ongoing project have been very encouraging so far.  Over 100 neurotrauma patients been given WeHab therapy at Memorial, and more were also run at St Joseph Hospital.  Both patients and therapists found the system to be quite useful in the clinic. Subsequently, we have conducted several studies in our lab to test the optimal forms of feedback to promote the most efficient balance performance. Much of this work has been funded by two grants: a 2010 ND-CTSI Pilot grant award, and a 2011 NSF Smart Health research grant award.

Scholarly products from this project thus far include:

and Rehabilitation.  Plos One.